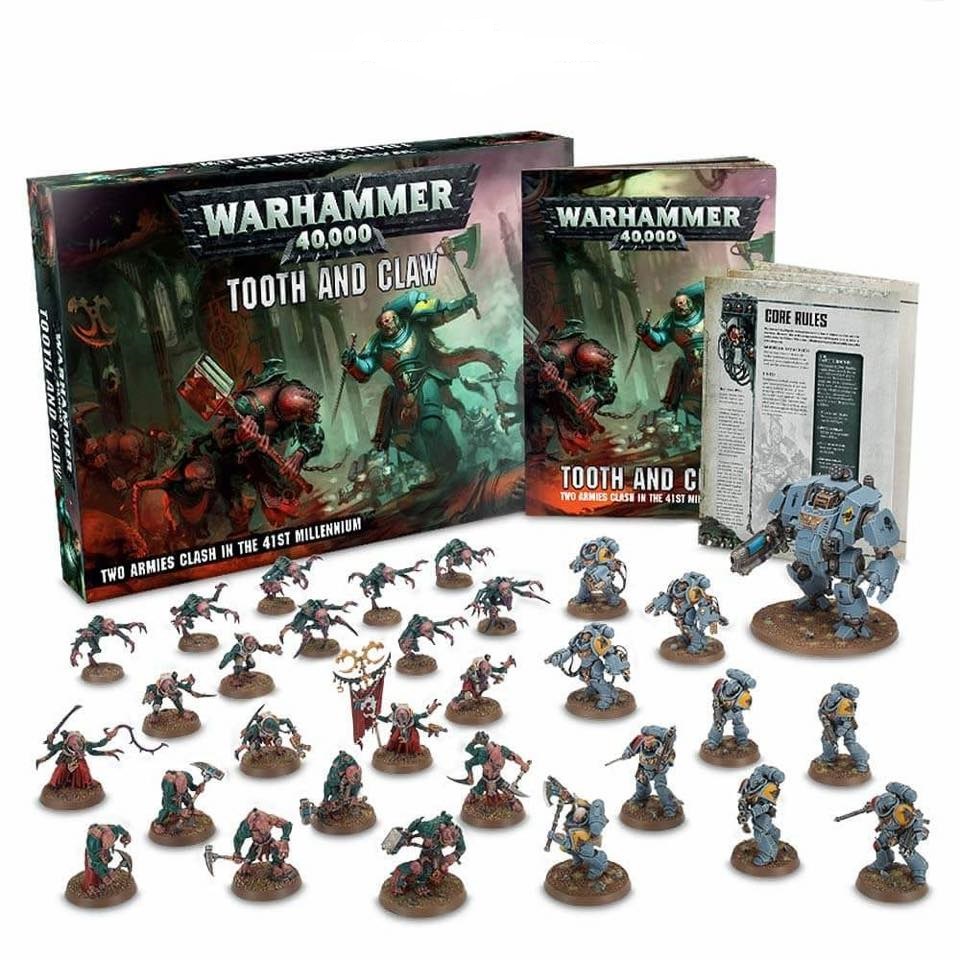 Surrounded by the darkness of the Imperium Nihilus, Vigilus is a world beset by horrors, but the most insidious threat is one that has emerged from within. The mutated xenos-human hybrids of the genestealer Cults have hidden in the shadowy depths of Vigilus’ hivesprawls for generations. Now they have arisen to slaughter their Imperial oppressors and prepare the world for the coming of the Star Children. While the planet’s defenders fight desperately to hold off hordes of invaders, a strike force of Space Wolves sets out to hunt down the cultist insurgents, find the source of the Genestealer Curse and purge their enemy from existence.

Tooth and Claw is a great-value boxed set containing 2 armies split across the forces of the Space Wolves – a fiercely independent Space Marine Chapter who have existed for ten millennia – and the Genestealer Cults – a sinister organisation of hybrids whose swollen ranks will surely conquer. You can use these miniatures to act out the scenarios described in the Tooth and Claw book – 4 connected missions that recreate the violence on Vigilus – and use them to expand your games of Warhammer 40,000. Included in the box:

- War Zone Vigilus: a brief history of this embattled world – a vital supplier of materiel for the Imperium – and the emergence of its massive Genestealer Cult uprising;
- Space Wolves: an overview of this Chapter, and their mission to hunt down the biggest threats in the galaxy which has led them to Vigilus;
- Genestealer Cults: a primer on these twisted groups of militant fanatics, who spill from the shadow to choke entire worlds;
- Horror in the Hollows: describing the vast system of underground reservoirs beneath Vigilus where, unbeknownst to those on the surface, the Genestealer Cults are massing;
- A Howl in the Night: the story of Haldor Icepelt’s interception of the distress calls from Vigilus, and his Space Wolves strike force’s arrival;
- Detailed background information on each unit included in the box;
- A miniatures showcase featuring a beautifully painted examples of the miniatures in Tooth and Claw.

- 9 datasheets providing rules for each of the included miniatures;
- 4 Echoes of War missions, which can be linked together to form a small campaign echoing the narrative of Tooth and Claw. This includes City of Traps rules, which simulate the devious Genestealer Cults’ methods of fighting on home turf;
- Points values for every included miniature, for use in Matched Play.

- 1 Space Wolves Primaris Battle Leader, representing Haldor Icepelt, who is armed with a bolt carbine and power axe. Posed storming forth with weapons primed, he can be modelled with or without helmet;
- 5 Primaris Intercessors, armed with a choice of 3 bolt rifle variants, with options for a Sergeant;
- 3 Primaris Aggressors, armed with a choice of auto boltstorm gauntlets or flamestorm gauntlets, with options for a Sergeant;
- A Space Wolves Primaris Upgrade frame, featuring 5 Intercessor shoulder pads, 1 Intercessor Sergeant shoulder pad, 3 Aggressor shoulder pads, 3 heads, unmistakably Space Wolf in origin – 1 helmeted, 1 with mohawk and beard, 1 with fully spiked hair, 1 right arm holding a chainsword, 1 left arm drawing a knife from its sheath and 7 accessories: 2 wolf tails, 2 pouches, 1 necklace, 2 diamond shaped amulets.

- 1 Genestealer Cults Abominant, a hulking brute in chains and shackles, accompanied by a mindwyrm familiar and clutching a power sledgehammer;
- 5 Aberrants, which can be armed with rending claws and either power picks or power hammers, depending on the arms you choose to model them with – this includes 17 (!) different heads and options for a Hypermorph;
- An Acolyte Iconward, armed with an autopistol and blasting charges, clutching hi cult’s sacred banner;
- 5 Hybrid Metamorphs, armed with autopistols, Metamorph talons, blasting charges and rending claws. Included are hand flamers, a heavy rock saw, a heavy rock drill (with backpack), a heavy claw cutter and options for an Metamorph Leader, who can take a bonesaw;
- 8 Genestealers, multi-limbed monstrosities are armed with rending claws and scything talons, and the kit includes a number of toxin sacs along with an infestation node.