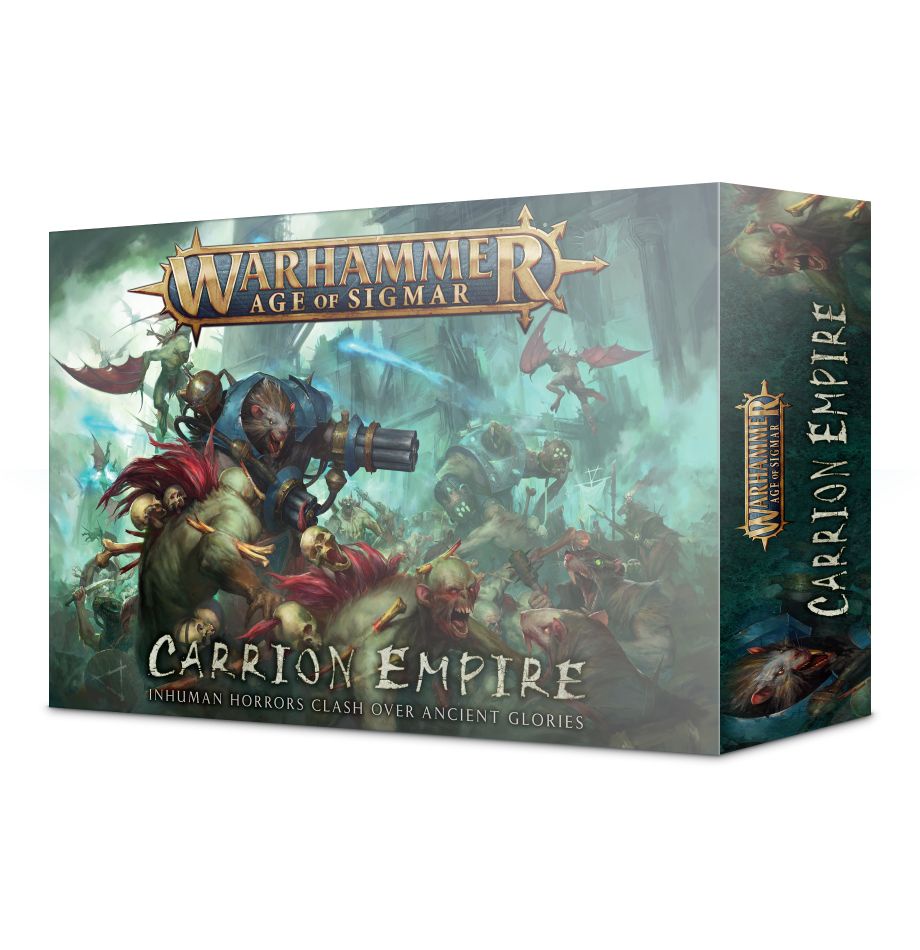 The skaven Clans Skryre and the lurking ghouls of the Flesh-eater Courts do battle amidst the ruins of a cursed civilisation, fighting over arcane secrets like scavengers over a rotting corpse.Carrion Empire is a battlebox that pits the scheming skaven of the Clans Skryre against the delusional monstrosities of the Flesh-eater Courts. Inside, you'll find:– 33 models split across two armies, giving you a variety of units for both the Skaven and Flesh-eater Courts, all costing less than getting the kits separately– Two new Heroes – the commanding Abhorrant Archregent and ingenious Warlock Bombardier, both exclusive to this set.– The 40-page Carrion Empire booklet, which includes lore, battleplans and rules for playing with the set right out of the box.– Warscroll cards and tokens for keeping track of both armies on the tabletop, including range rulers, command point markers and more.Whether you're looking to battle a friend, start playing Warhammer Age of Sigmar, or just fancy a great deal when reinforcing your army, Carrion Empire is for you.Carrion Empire contains the following Citadel miniatures:– 1 Abhorrant Archregent – only available in this box set at this time– 20 Crypt Ghouls– 3 Crypt Horrors– 3 Crypt Flayers– 1 Warlock Bombardier – only available in this box set at this time– 1 Doomwheel– 1 Warp Lightning Cannon– 3 StormfiendsThe box also includes:– The 40-page Carrion Empire book– A Warhammer Age of Sigmar core rules booklet– A Token sheet– 8 warscroll cards